This is in our opinion an underrated well constructed Bluetooth speaker that pumps the bass and music out, which will not disappoint.

Check out our portable Boss review and see why it’s so good and what its sound can do.

Perfect for use at home and you can pair them together to cover multiple rooms in the house, at the office, and anywhere else you need surround sound.

Here’s everything this powerful Bluetooth speaker has to offer.

The Sound and Power Review

The powerful amount of audio sound that comes from this portable speaker is a lot more impressive than that of most wireless speakers of a similar size. It actually sounds like it’s about 50% louder than the BOSE Soundlink if you crank up its volume.

Yet, comparisons aside, the tech specs for this product show its true power, to say the least.

A 3.5-inch woofer with an impedance of 4 ohms delivers powerful punchy bass. The added feature that gives this Bluetooth speaker more boom is the addition of dual bass radiators, which increase the level of bass vibration.

If you stand anywhere near the speaker, you will feel the effective vibration that comes from the thumping deep bass it produces.

Even at the highest volume, it delivers incredibly crisp high notes. The sound that comes from a single speaker is concert-worthy in any large room thanks to the integrated 1-inch silk dome tweeter with an impedance of 6 ohms.

No matter the volume the music is played at, the balance of the treble and bass is perfectly blended with little or no distortion at all, so the highs and lows stay absolutely clear.

When plugged in the speaker will output 30 watts RMS and when on battery 20 watts RMS.

Is this Tech Life Boss a Waterproof Speaker?

The 5 can also be described as water-resistant or splashproof.

We hope you love the products we recommend! Just so you know, we may collect a share of sales or other compensation from the links on this page. Thank you if you use our links, we really appreciate it! 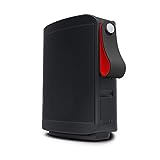 So, this portable speaker, although not 100% waterproof, can still be used outdoors or indoors as long as it’s not submerged in water or for that sake any other liquid.

Be mindful though, even the water splashes can be harmful to the materials that speakers are built from.

And by that, we mean seawater as it contains salts or pool water as normally some chemicals such as chlorine are used to kill bacteria in pools. Those salts and chemicals over time can ruin the look and at times even functionality of your speaker.

Else, if you are partying in the backyard or hiking in the bush and it suddenly starts raining, you don’t need to worry about running inside with your speaker. It should be able to survive as even though not 100% waterproof it is water-resistant, which means it will resist rain splashes for a while.

Just don’t place it on the side of the pool at your next pool party, cause if it suddenly gets knocked and falls into the pool, it most likely will be damaged.

Don’t let the lack of power ruin your next party! This speaker’s rechargeable 3.7V 2600mAh Lithium-ion battery will be fully charged in 6 hours when plugged into a standard household outlet.

Once fully charged you will receive up to 10 hours of playback time, depending on the audio content and volume at which the music is played at.

And, as already mentioned above, if charging the speaker while plugged into mains power to be charged and still using it to play audio, it will output a greater number of watts than when on battery power. Decreased wattage allows for longer playback times when used on the battery.

The battery can also act as a power bank, meaning you will be able to charge your mobile devices such as a mobile phone or a tablet using the integrated USB port. This is an incredibly helpful feature that could be useful when you are out on a camping trip.

Just remember that using the speaker’s battery as a power bank will reduce the audio playback time since mobile phones will suck power up like a sponge. So, if you do use the speaker as a power bank especially where mains power is freely available, it should be plugged in so it doesn’t affect the battery.

How Do I Pair Boss Speakers Together?

Connecting multiple Boss speakers together is easy. And once they are linked, even if you switch them off and back on, you will not need to reset the connection unless for some reason you want to.

When pairing one will become a master and every next one will be a sub.

So, turn on the first speaker and press the [Master] button.

Once the blue and white LED lights start flashing, turn on the next one and press the [Sub] button on it. 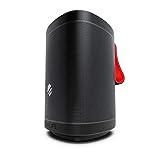 On the sub speaker, only the white LED will flash. When this white light stops flashing you are ready to pair the master speaker with your audio source device, which can be any Bluetooth-enabled mobile or non-mobile device, such as a phone, tablet, laptop, or PC.

To link more than two speakers together, you can follow the same steps as described above. Once the master speaker is turned on, keep turning on every next sub and pushing the [Sub] button in order to link. You can connect up to 100 speakers, from which one will always be a master and the rest subs.

When connected, each sub speaker will play audio that the main speaker is playing at the same time.

Is there a Speaker Manual for Information?

Three different file downloads are available for extra help if required to anyone who purchases the Boss wireless audio speaker. The first file contains all the specifications of this Bluetooth speaker. This is essentially a specs sheet with all the features this portable speaker is packed with.

The second one is the user guide, which explains everything that you need to know about how the wireless speaker works.

There is also a list of what is included in the package, details of the functionalities that are built into the speaker, and step-by-step instructions on how to set up and troubleshoot your speaker. In addition to that, a list of technical specs is also included.

The first thing that you want to do when buying any product that comes with a warranty is getting it registered. This helps you obtain a warranty that begins after you purchase a Tech Life Boss. Most of the time you need to give your personal details.

This is so you will be allowed to have free repairs or replacements if your speaker is faulty. It also ensures that the money you spent can be recovered if the speaker doesn’t work and you can’t have a replacement. 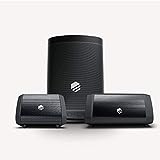 Tech-Life Bluetooth Speaker Set Including the Boss
Buy on Amazon

It’s not required to register the product, but if you don’t you will not receive the full warranty benefits that are available from Tech-Life.

Most people will opt to take a broken speaker back to that store where they purchased it for a new replacement.

But for those who have received it as a gift, getting their Boss registered is a must. The registration only requires that you have the original receipt to prove the purchase.

Here is a link to the official online registration where you provide your full name, email address, mobile number, and purchase date.

When you submit the form with your information, the system will send you a text message that contains a registered number, which you can store safely with the rest of the documentation inside the speaker’s package.

Does Tech-Life Have an App?

Tech-Life has made it easy for you to pair their speakers to Bluetooth-enabled devices as well as link multiple speakers without the need for an app. So, no, they do not provide an app, but there are plenty of other apps to try if you really want to have an app.

If you have a smart home device like Siri or Google Home, these will help you connect to your audio speaker, too. You can activate them through the speaker by pressing the [Play/Pause] button twice and start talking. Your smart home device will respond right away if turned on.

We hope this article like all our other reviews has given you a better idea about how the Boss wireless speaker works inside and out. If you are thinking about purchasing this mighty portable speaker that offers excellent linking abilities, this model is a perfect choice.

A quality portable Bluetooth unit – the Boss is perfect for multi-room use indoors and is waterproof to an IPX5 standard, which allows it to be your outdoor life companion as well.

We also want you to have more knowledge about what this Bluetooth speaker can and cannot do.

This way you can make a better choice on whether or not Tech-Life Boss is right for you.

Looking to spend a little more? Explore our range of the best portable speakers, most expensive Bluetooth earbuds and Bluetooth marine speakers that we offer.

The Best Portable Speakers is a participant in the Amazon Services LLC Associates Program. An affiliate advertising program designed to provide a means for sites to earn advertising fees by advertising and linking to Amazon.